Create Moving Water In Your Garden

For many, the sound of splashing water from either a fountain feature or a cascade or waterfall, thrills the senses. While still, reflective pools have a soothing effect. The element of moving water adds excitement, and even the tiniest trickle of water in a stream will make a delightful impression.
No matter where you live, it is possible to create moving water features in a range of styles, both large and small, for patios and gardens.

Fountains are ornamental and often formal in style, but most other moving water appears natural in the correct environment. The most successful man-made streams, as well as the waterfalls and rockeries which go with them, are designed to imitate nature, and it pays to take time to study water features which have occurred naturally.

Unless you are lucky enough to have a natural spring or river on your property, you will need a pump to move the water to a height where gravity can take over. It then flows back into the pond and is recirculated over and over again. In addition, this equipment will aerate the pond, which is a bonus for fish. The small submersible pumps which are frequently sold with fountain fittings are adequate for the smaller water feature, but a more ambitious arrangement will require a more powerful submersible pump or even one which is located on the surface near the water (see Building Basics). You may even need more than one pump where, for instance, a waterfall flows into a pond, and from there to a stream and a second pond.

Whether you are constructing a waterfall or a cascade, it is important that as little water as possible escapes as it flows over and off the rocks and spillways. If there are leaks, or the water splashes excessively, you may find it necessary to install a top-up system in the pond to rectify these problems (see How to Finish Your Pond).

It is worth remembering that some aquatic plants, water lilies in particular, do not like currents and splashing water.

Waterfalls are a popular feature of informal ponds and may be successfully linked to man-made watercourses and streams. A succession of informal cascades can be particularly effective.

Here is a waterfall for you can check out: 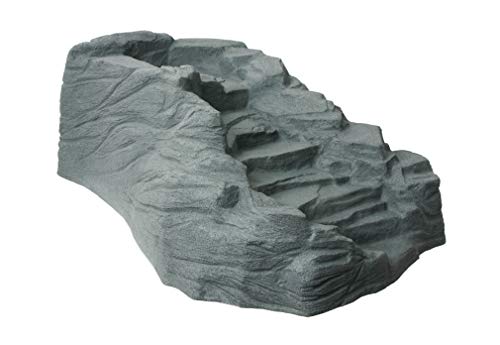 The simplest way to construct a waterfall is to first build up a rockery and then pipe the water to a concealed point at the apex. The pump, which should be placed in an accessible spot at the lowest point of the waterfall, will activate the flow of water over the rocks. You can increase both audible and visual splashing by placing additional boulders in the pond at the bottom of the waterfall. Remember that the higher the rock feature, the stronger the pump must be.

Of course, the more natural your rockery appears, the more impressive the waterfall will be. You will have to cement the rocks in place, but do this carefully, so the mortar is not obvious.

In nature, the rocks over which water cascades and falls are not solid or impermeable. However, you will need to prevent unnecessary water loss, so it is best to seal the surface over which your water flows. Furthermore, the rocks should be set on a waterproofed concrete foundation. Unless you are using very large rocks, it is often best to create the watercourse with concrete first, and then construct the rockery.

Although liners may be used to cover the course of a waterfall, they should be very well camouflaged or they will spoil the whole effect. Bitumen is fail-safe, but it, too, looks rather ugly when it is exposed. A rich render mix to which a waterproofing agent has been added, and possibly a coat of polyurethane sealant, will definitely look more attractive.

The secret to any cascade or waterfall is the pump:

Cascades can be constructed in a more formal style. They may, for instance, imitate the Japanese ‘sheet’ waterfall, or the water staircase which appeared in many French and Italian gardens in previous centuries. They can also be part of a more natural moving water feature in the form of spillways or weirs which regulate the flow of the water.

Whereas the majority of waterfalls rely on rocks and channels as a watercourse, a formal cascade feature will often include a series of flat lips. These may be made from various materials including slate, sheets of fiber cement, and even metal. You may even prefer to construct a succession of stepped pools lined with concrete, softening the edges with rocks and plants to achieve a more natural effect.

Preformed cascade units, although widely available in the USA & Britain, are not found in all countries. Made from the same materials as precast ponds, they can be rapidly installed, but must be sensitively positioned to look natural. They are also relatively small and might be inappropriate in some environments.

Streams do not require much space, although they are generally more effective if there is room for them to meander. The course a man-made stream follows should be as natural as possible, so remember that in nature water generally takes the line of least resistance, except where it is forced around natural obstacles like rocks.

The size of any stream you decide to create must, of course, be in proportion to the garden and any other water features, and it need not be particularly deep. You can include a number of ponds and weirs along the course of the stream to add interest. You will need a steady supply of moving water to feed it and the pump (or pumps) used must have sufficient capacity to adequately recirculate the volume of water required for a constant flow.

A more contrived watercourse may be channeled rather like a mini-canal, incorporating fountains and formal cascades. Although any type of watercourse can be constructed with concrete, a stream may be very successfully created using clay or bentonite, provided it is reasonably slow flowing.

This site uses Akismet to reduce spam. Learn how your comment data is processed.

ABOUT US
The Ponds Professor is an authoritative resource that covers everything about ponds and water gardens. We have been in the industry for more than 25 years, writing articles and producing books on the subject. We also have hands-on experience that we are happy to share. You will see many pics of Penny & I building a few of the projects.
Contact us: Please see our Contact Page
© all text/copy and pictures The Pond Professor & PJAWeb • Site built by Janek Szymanowski © *NOTE: PoolsProfessor is a participant in the Amazon Services LLC Associates Program, an affiliate advertising program designed to provide a means for sites to earn advertising fees by advertising and linking to poolsprofessor.com
error: Content is protected !!
MORE STORIES

How to Build a Small Duck Pond

October 7, 2019
We use cookies to ensure that we give you the best experience on our website. If you continue to use this site we will assume that you are happy with it.Ok